Whippet owners will love our selection of cute Whippet checks. We search online check merchants that offer Whippet check designs so you don't have too. Browse our adorable check selection and enjoy your favorite dog breed checks today. 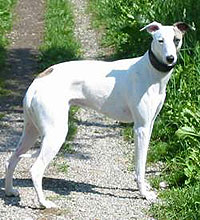 The running whippet strikes one with awe. So fine, almost as if lean muscles and tendons are stretched to their limit and could snap with little provocation. The trot and shy interaction which is so much a part of the whippet as a tail and four paws will certainly warm the heart.

There is evidence based in artifact’s that leads some people to believe that a whippet type dog was present in ancient Rome and Egypt. Paintings and pottery show images of a dog that carried the whippet head shape and ear type. It is also said that the Romans brought along a greyhound type dog when they defeated the Celts. Perhaps then, due to the Celts already having a fine racing dog, cross breeds were created that eventually became the whippet of today.

Some people believe that the whippet is a result of breeding from a runt greyhound therefore creating a much smaller dog and other believe the act of crossing a smaller terrier or spaniel with the greyhound has provided us with this, elegant looking, breed of dog. The whippet does bear great resemblance to the following breeds of terrier;

In 18th and 19th century England the whippet was first seen in the Midlands and Northern England. The dog became a popular family pet. Sometimes referred to as the poor man’s sight hound, or poor man’s race horse, he was more the working man’s dog than that of gentry. Initially the word ‘whippet’ was used to describe any fast moving dog, ‘Whip it’.

Bred and used initially for chasing and killing of rabbits it is said that the whippet was used in cruel gambling games in which bets where placed on which dog would make the quickest kill. These games took place in pens with a number of rabbits and were soon outlawed by the humane society as cruel and unnecessary. The dog also caught wild rabbits in order to help feed his human family.

The next human derived game with which the whippet participated was rag racing. Where a rag or fur was dragged along a run and the dogs raced each other, this enabled the people to gamble on their dogs. Mining families gave a lot of care and training to their racing whippet. This breed of dog was used in racing for many generations and this is shown in the breed today.

The first whippet type dogs were taken into America by English workers. English mill operators of Massachusetts managed a fine and established Whippet racing circuit and their popularity spread. The sport then moved south to Maryland and Baltimore. The Whipped was recognized by the American Kennel club in 1888.

The whippet breed has not developed or changed much since its acceptance. Long haired dogs have been bred and in 1890/91 the kennel club recognized the whippet as a pure breed of dog. After this acceptance the breed was adapted for slightly more elegance in the show and pet world. Whippets despite their usually impeccable manners can be very driven at sports like flyball and agility. This breed of dog is also a relaxed, friendly and unassuming family pet.
The whippet loves to race for it is in his genes but he is a dog breed that rarely develops behavior problems that are based on a lack of fulfillment in the role he was originally bred for. A whippet will generally be an easy, humorous and loving pet that adores people whether he races or not. He simply needs good food, exercise and care to be a very rewarding pet.