Vizsla lovers will love our selection of cute Vizsla checks. We collect top check merchant's Vizsla check designs, for you into one place. Browse our adorable check selection and enjoy your favorite dog breed checks today. 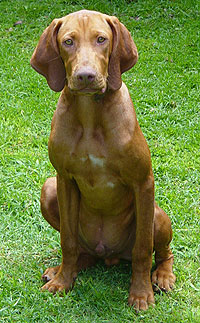 Known for years as the Gift of Kings, the Vizsla has for centuries been viewed as a valuable dog breed. Their bloodlines have remained purer than many of the nobles who bred them, in part because they were restricted to the Greater Hungarian Kingdom’s aristocracy. They rarely left the kingdom, except as honored gifts to Italy and Spain’s queens. The esteem in which the breed is held has helped it retain its high standards, aided by numerous proponents of the breed.

The ancestors of the Vizsla lived with the Magyar tribes that inhabited the Carpathian valleys. Depictions of the Vizsla, working with hunter and falcon, date back more than 1000 years. By the early 1200s, the breed was distinct and known as the Yellow Pointer, recognized for its all-around skill in hunting. It was an excellent nose dog, scenting and finding game, as well as being exceptional at pointing and retrieving.

By the mid 1300s, the breed was depicted in the Vienna Chronicles. This was a document that compiled early Hungarian codes and laws, including a section on hunting by the nobility that featured an image of a Vizsla. The breed became known by its modern name as early as the 1500s, when it was in great demand as a hunting companion. Its name derives from the ancient Hungarian word vis, meaning search. By the early 1700s, purebred records were being kept in studbooks.

Unfortunately, despite the prominent position the Vizsla has held for centuries, the breed almost became extinct after World War II when the Soviets took over Hungary. Many dogs were killed during this period, with estimates of up to 90%. Some Hungarians who fled the country at the time were able to take their dogs with them, but most were not so lucky. Fortunately, dedicated breeders in both Hungary and other countries where the dogs and their owners escaped to were able to revive the breed.

Since they first became favorites of the Magyars and early barons, the Vizsla has been much more than simply a hunting dog. These are not dogs to work the fields and then spend the night outdoors or in kennels. These are and have been family dogs that hold an equal place in the family, and they return the favor by bestowing great affection and loyalty upon their family.

Many owners joke about the amount of affection the Vizsla shows, calling them Velcro dogs because of their desire to be with their family members at all times. This is a dog that wants and needs your time and attention. Vizslas can become destructive and mischievous when left alone for too long and allowed to grow bored. Some of their antics may make you laugh when you discover them, but others may leave you frustrated.

The Vizsla is highly intelligent and responds well to consistent and fair training, not just in hunting, but in general behavior. Their social nature means they typically get along well with strangers, children, and even other animals, particularly when socialized properly at a young age. They need a great deal of exercise each day, but with proper daily outlets, they can make surprisingly good apartment pets.

The Vizsla is a stunning dog breed, with a short, smooth coat in glorious shades of golden rust and relatively long, silky ears that lie close to the head. They have a lean, athletic build and an overall regal bearing – when they’re not goofing around for your entertainment. Excelling on land and in water as a scenter, pointer, and retriever, they earn equally high marks as a canine best friend.