The Unfolding Tale of the Chinese Shar-Pei 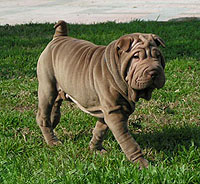 It’s hard to imagine that a dog with as many folds of skin as the Chinese Shar-Pei wouldn’t be soft and cuddly. Yet the fur that covers all of those famous folds has an unexpectedly harsh and prickly coat if brushed against the grain. Not surprisingly, shar pei means sand skin in Cantonese.

It is equally hard to imagine the fact that the Shar-Pei hovered near extinction in the late 1960s. In fact, the Shar-Pei was once included in the Guinness Book of World Records as the world’s rarest breed of dog.

Fortunately, the Chinese Shar-Pei is velvety soft when stroked from head to curly tail, and fans of the breed stepped in during the 1970s to help keep the breed going. The result is that we are able to enjoy this ancient breed for many more years to come.

Early Shar-Peis were used for hunting and then later used for dog fighting. Amazingly, it was the breed’s loose folds of skin that helped it in both activities and they were bred to enhance this feature. It may seem counterintuitive to think that loose skin would make it easier for a dog to get away, but in the Shar-Pei’s case, that is actually what happens. If another animal, be it dog or wild boar, happens to get a mouthful of the Shar-Pei, its skin is still loose enough to allow it to almost turn around in its own skin and get a bite on its opponent. In addition, the Shar-Pei’s rough coat made opponents less likely to hold on for long.

Nowadays, the rough coat is less appealing in a companion animal and it is less common than it once was as breeders aim for a softer coat. The rough coat is called a horse coat and it stands stiffly off the body, giving the prickly feel. The more common coat is the brush coat, which is slightly longer — although still less than 1 inch – and softer to the touch. The colors of the coat include red, fawn, cream, sable, chocolate, and black.

The Shar-Pei is at its wrinkliest as a puppy, but seems to grow into its loose folds of skin as it ages. An adult will often have a smoother body, with the folds only remaining on the head, neck and shoulders.

There is one last distinctive feature of the Shar-Pei that catches people’s attention: the blue/black tongue. It is thought that the Shar-Pei and Chow Chow both shared a common ancestor at some point, since these are the only two breeds that feature this unusual characteristic.

The Chinese Shar-Pei has been around for thousands of years, probably dating back to at least 200 B.C., during the Han Dynasty. It seems to have developed in Guandong, one of the southern provinces of China.

Thanks to their herding and hunting, as well as their ability to protect, they remained popular dogs for centuries. However, after the rise of the Chinese Communists, many dogs, including the Shar-Pei, lost favor. Dog ownership was considered something for the elite and therefore not appropriate. Many dogs were gotten rid of, and owning a dog could lead to penalties.

As a result, by the 1970s, the Shar-Pei was near extinction. If it weren’t for the hard work of Matgo Law, a Hong Kong businessman, the breed may have disappeared. Fortunately, in an effort to save the breed, Law smuggled approximately 200 of the dogs out of China and took many of them to the United States, where he placed an ad in a dog magazine to encourage interest in this unusual breed.

The Chinese Shar-Pei is reserved around strangers, but affectionate with its family. With its long history and unusual appearance, it’s not hard to understand why people went out of their way to ensure the longevity of this wonderful breed.