Setting the Standard for Schnauzers 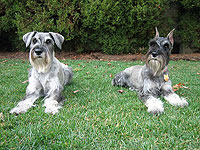 For more than 600 years, the Standard Schnauzer has been setting the standard as both a hard-working dog and a friendly companion. The Standard Schnauzer was the prototype for all other schnauzers and their proponents may argue that there was no need to mess with perfection.

Throughout the centuries, they have proven their worth, often representing the best of all dogs, with their loyalty, hunting ability, protectiveness and family friendliness. Their appearance is both regal and comical, as is their demeanor. They can go from focused guard dog to lovably playful scamp, as the situation demands.

Of the Standard, Miniature, and Giant Schnauzer, the Standard was the first of the three. The word Schnauzer stems from the German word for snout, referring to the breed’s signature facial hair, and it was in Germany that the Standard Schnauzer originated. Just how far back the breed goes is unclear. A statue dating back to the 1300s, which stands in Mechlinburg, Germany, shows a hunter with a dog at his feet. That dog bears a close resemblance to the Schnauzers of today.

Since that early statue, their history has been documented over the centuries by some of the greatest artists of the Western world. Beginning in the 1400s, Albrecht Durer began including his own Standard Schnauzer in many of his works. Other famous artists who repeatedly included Schnauzers in their art include Rembrandt, Lucas Cranach the Elder, and Sir Joshua Reynolds. To appear in the works of so many artists suggests that the Standard Schnauzer was already held in high regard.

The early Schnauzers were developed for herding, guarding, and even ratting. In fact, their skill at ratting is one of the reasons why they were originally classed as terriers in the United States, before eventually being placed in the working dog category. They are alert, agile, and display great endurance, making them excellent working dogs.

Most likely, the Standard Schnauzer developed by combining the German pinscher, the black German poodle, and the wolf spitz. They were first introduced into the show ring as a wire-haired pinscher, and the name Schnauzer comes from the name of one of these early show dogs.

Long before taking to the show ring – and long after, as well – the Standard Schnauzer has fulfilled a number of duties. As well as rat catcher, Schnauzers were used as guard dogs, frequently guarding a farmer’s produce at the marketplace. They have continued as fearless guard dogs, even working on Australian sheep ranches to help keep out prowling coyotes. Their fearlessness and bravery saw them work as police dogs and even as dispatch carriers and Red Cross aides during war time. Nowadays, they still find work as sniffing out drugs and bombs, as well as working on search-and-rescue teams.

The Standards Schnauzer is a sturdy, square-built dog, with well-developed muscle and a coarse coat. He exudes strength and determination. His head has a solid, rectangular appearance, punctuated with arched, wiry eyebrows and a bristly, distinctive mustache and beard.

The breed’s coat is stiff and wiry and is found in either pepper and salt or solid black. Although their coat continues to grow, rather than fully shed, they are not considered hypoallergenic. Twice a year, typically when most dogs shed, the Schnauzer’s coat will become dull and will be easily pulled out by hand so that a fresh coat can grow in. An alternative to this twice-yearly grooming process involves regular use of clippers. This can cause the coat to become less wiry and less full in appearance. It can also cause the coat to tangle more easily. Clipping versus hand stripping often comes down to personal preference and the willingness to go through the laborious hand-stripping process or ability to find someone trained to do it.

Regardless of the coat’s maintenance, it is important to keep the facial hair and longer leg hair properly trimmed. The facial hair needs to be brushed daily to avoid tangles and should be trimmed with scissors or clippers on a regular basis. Overall, the Standard Schnauzer requires a great deal of grooming, so owners must either be willing to do the work themselves, or take their dogs in regularly to be professionally groomed.