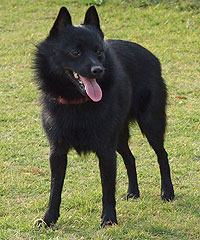 It’s hard to believe that such a small dog could generate such a great deal of disagreement over the origins and meaning of its name. Although everyone finally agrees that the Schipperke comes from Belgium, the debate rages on whether the name means Little Shepherd or Little Captain. What can be agreed upon is the fact that this is a charming and appealing little dog.

The Schipperke seems to have originated in the Flemish part of Belgium around Brussels and Leuven. The Flemish language is very similar to Dutch, but the dialect in this particular region adds its own variations. Thus, the word schipper means shepherd in the local Flemish dialect and ship in Dutch.

The Schipperke is an old breed and has served as a shepherd, or sheepdog, as well as a canal boat companion and watchdog, adding further fuel to the flame. However, most early texts always described the Schipperke as a sheepdog, even when talking about the little black sheepdogs found on canal boats.

Most likely, the Schipperke did start out as a shepherd dog, particularly as it was only the aristocracy that was allowed to own large dogs. However, the non-nobility still needed a dog that could help herd sheep while also catching small vermin around the farm, and the small Schipperke perfectly fit the bill. Eventually, the little dogs surely did end up on canal boats and barges, because their small size and vermin-hunting ability would make them excellent shipmates. Their experience herding sheep also made them suitable for encouraging the towing horses that helped move the barges along the canals.

Many Belgian canine experts tend to believe that Schipperke means Little Shepherd and that the confusion results from a book published in 1894 by Rawdon Lee. Other fans of the breed say that the Belgians simply wanted the breed to be known as the little shepherd because of its resemblance to the Belgian Sheepdog (Groenendael), using another publication from 1894 as their own source.

Regardless of the specific meaning of the Schipperke’s name, the most important thing is to understand the dog that exists today. The modern Schipperke is a lively and sometimes headstrong breed that packs a lot of dog into a small body. Anyone considering getting a Schipperke shouldn’t assume that a small dog is necessarily an easy dog with which to live.

The Schipperke is a distinctive dog, with its thick black fur that is even longer around the neck, shoulders and back legs. Its face is fox-like and accented with triangular, erect ears. During most of the year, the coat needs surprisingly little grooming, other than brushing a few times a week. However, two to three times a year, Schipperkes are known to blow their coat, meaning that they lose most of their undercoat within ten days.

As with any breed, proper socialization and training from an early age plays an important role in creating a well-behaved dog. This is particularly important with the Schipperke, which can be difficult to housetrain if early and consistent training isn’t followed. This is a breed that can also be willful and stubborn, partly due to its independent nature and high intelligence.

Yet the Schipperke also offers loyalty and lots of fun. This is an energetic breed that loves to play and go for walks. They are somewhat hesitant around strangers, but once they are comfortable with someone new, they become cheerful and friendly. This hesitancy is part of their protective nature. They will alert their owners to anything out of the ordinary and while they may not be big enough to seriously hurt an intruder, they can alert their owner thanks to their loud bark.

Whether you live in an apartment, on a farm, or on a boat, the Schipperke can make an excellent companion. Devoted and affectionate with their family, this little Belgian dog probably won’t care if you call him a captain or shepherd, just as long as he can spend time with you.