The Russell Terrier: Personality to Spare 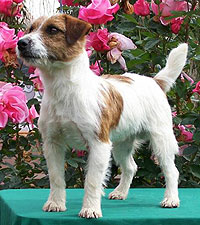 The Russell terrier, sometimes also called the Jack Russell terrier, serves up a lot of personality in a small body. He may stand only 10-12 inches at the shoulder, but his size never holds him back. An escape artist who seems to go over the wall as often as under it, the Russell terrier will keep his owners on their toes. Yet the breed is also lovingly devoted to his family and provides a wealth of fun and entertainment.

The Russell terrier had his beginnings in England and his refinement in Australia. The origins of the breed start with Parson John “Jack” Russell in England, who was an avid hunter and dog fancier. He wanted a fox terrier that was quick and efficient. The result of his breeding was a bold, fearless dog that was highly athletic, intelligent and focused on the hunt.

As a terrier, the breed needed to be small and strong enough to go to ground easily, but also brave enough to go underground after its prey. These working dogs were also required to be comfortable around horses, because they were often carried in terrier pouches on horseback to reach the hunting ground. As a result, Russell terriers are still common sights around stables, because of their comfort around the horses, as well as their ability to control vermin.
As the breed developed in Australia, it became slightly different in height and structure from the dogs that continued to be bred in England. As a result, many dog club organizations have classed the Russell terrier as a separate breed from the Parson Russell terrier, including the American Kennel Club and the Federation Cynologique Internationale.

Not surprisingly for a hunting dog, the Russell terrier’s coat is relatively low-maintenance. Unless he has gotten particularly dirty while digging – which is highly possible – his coat usually only needs a weekly brush. The Jack Russell terrier’s coat is smooth, rough, or broken, and is water-resistant. The color is predominantly white, with tan and/or black markings. Overall, he is a sturdy, rectangular breed who is slightly longer than he is tall.

A Bundle of Energy

The Russell terrier is sometimes thought of as the ultimate working terrier. Fearless and determined, this breed can seem unstoppable. The Russell terrier is a strong-willed stubborn dog that needs a firm and consistent hand in order to remain manageable. It is certainly possible to train a Jack Russell, but it does take work and patience, particularly because the dog can become easily bored.

Some owners may feel like their dog is made of rubber, due to its bouncy nature, springing to heights sometimes as high as five feet. A Russell’s jumping ability paired with its high energy levels means that it will need a home with a yard that is fenced to a height that should hopefully contain this lively creature. Of course, some Russell terriers have been known to climb trees and chain-link fences. Yet the Russell is also a terrier, which means it’s an excellent digger. In other words, a Russell terrier should usually have supervision when left outdoors. There’s no telling what adventures this intrepid explorer may get up to otherwise.

Fortunately, if you’re willing to devote the time and energy needed to keep the Jack Russell terrier properly trained and entertained, you will be rewarded with a dog that is incredibly loyal and devoted to the family. He is full of entertainment, and Russell terrier owners who focus on appropriate energy outlets for their dog will probably have a lot of fun in the process. These dogs excel at agility competitions and love a long game of fetch. Despite their small size, they also make excellent jogging partners. In other words, a Russell terrier companion needs to be a highly active person with their own level of stubbornness and determination to match their lively canine friend.