Pug lovers will love our selection of cute Pug checks. We search online check merchants that offer cute Pug check designs so you don't have too. Browse our adorable check selection and enjoy your favorite dog checks today.

Pugs At The Park Personal Checks 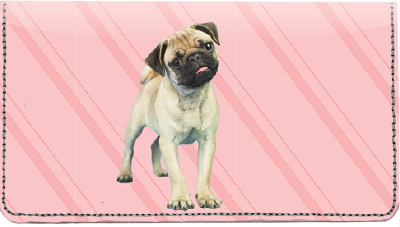 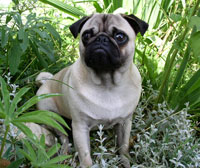 The pug’s appearance may be comical, but these small dogs have been royal favorites for centuries. They were originally bred in ancient China as stylish lapdogs for Chinese sovereigns. Hundreds of years later, they were introduced into Europe by the Dutch East India Company, and they soon became beloved pets of the Dutch royal House of Orange. In fact, in 1572, it was a pug named Pompey who saved the life of the Prince of Orange who was alerted to the presence of assassins by his little snub-nosed friend.

Eventually, the breed made its way to England, in the company of King William III. By the 19th century, even Queen Victoria had fallen under the breed’s spell. She had numerous pugs and personally oversaw their breeding.

It wasn’t just the nobility that had a soft spot for this charming dog breed. Even artists such as Goya in Spain, and William Hogarth in England, were known to include pugs in their paintings. Pugs became extremely fashionable throughout Europe, and quickly gained popularity in the United States when they arrived in the 1800s.

The pug’s wrinkled face and short, blunt muzzle are its most notable features, making the pug easily recognized. The wrinkles should be large and deep, and the pug typically has a slight under-bite, with the lower teeth protruding slightly past the upper teeth, although the muzzle should not be upfaced. Other notable characteristics of the breed include a square, symmetrical, well-muscled body with a deep chest, and a curled tail. The soft, velvety ears are either rose or button shaped, with a preference usually given to button ears.

Pugs come in either fawn or black. The shades of fawn can vary slightly, with apricot and silver tones, but the markings should be a deep black color. Generally the mask, or muzzle, as well as the ears, eyes, cheek moles, and back trace should all be black. The coat itself is short, glossy, soft and smooth.

A Latin phrase commonly used when describing the pug is multum in parvo, meaning “much in little”. Not only does it refer to their strong build, despite their small size, it also refers to their personality. Pugs are the quintessential big dog in a small dog’s body.

A strong will is a typical character trait of the pug; however, it rarely translates into real aggression. Pugs are generally friendly and playful and make good family pets. Unlike some small breeds, a pug’s sturdy body makes it better suited to playing with children, although there should always be adult supervision for the protection of both dog and child.

Because they were bred to be companions for nobility, pugs are relatively docile and even tempered. They are more than happy to provide quiet companionship or to entertain with their playful, outgoing nature.

Pugs typically live for 12-15 years, and are hearty animals, but they do require a certain amount of daily care. As a brachycephalic breed, referring to their “pushed in” face, there are certain health problems to which pugs are more susceptible.

The short nose of pugs can make it difficult for them to breathe easily. This means they can very quickly become overheated, because they are unable to properly cool their body through panting. Although all pugs snore and wheeze, it is important to recognize any change in the sound or extent of your dog’s wheezing in order to assure prompt veterinary care if necessary. Pugs are also prone to obesity, which can further compromise their breathing ability.

Their numerous facial wrinkles must be kept clean, sometimes on a daily basis, to ensure they do not become irritated and infected. Their protruding eyes are also more prone to injury and other eye problems, so it is important to pay attention to any redness or discharge.

The breed’s long history and popularity has made it an influential breed. The breed has played a part in the development of many other breeds, including the Pekingese, King Charles spaniel, and English bulldog. Yet, throughout its long history, the main goal of this unusual breed is to serve as a loyal and loving companion. They have proven themselves to be as focused on their job as any typical working dog, using their friendliness, playfulness and affection to win over the affections of all who meet them.