Labs For All Seasons Personal Checks

The Labrador Retriever: Service with a Tail Wag 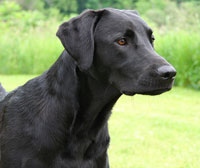 Like many Canadians, Labrador Retrievers have a reputation for being easy going and friendly. The breed, also known simply as a Labrador or Lab, is now one of the most popular breeds in the world, frequently topping the lists of registered dog breeds in the United States, Canada, and the United Kingdom. Their good nature, combined with intelligence and trainability, contributes greatly to their popularity, not only as pets, but as working dogs and as service dogs.

Labradors trace their origins to the St. John’s Water Dog, which made its home in the Newfoundland and Labrador region of Canada. These ancestors of the Labrador were used by fisherman to retrieve nets from the water and carry ropes between ships. However, it wasn’t until some of these dogs were taken to England by the Earls of Malmesbury and the Dukes of Buccleuch in the 1800s that the breed became known as the Labrador and developed into the breed we know today.

The original dogs were bred with other retrieving dogs, such as setters and spaniels, to enhance the breed’s retrieval abilities, so that they are now excellent retrievers on land and in water. Their excellent sense of smell, gentle mouth touch, and even temperament have seen the breed become popular not only for hunting, but also as sniffer dogs, service dogs for the blind and disabled, and even as rescue dogs.

Although originally black, with occasional white marks on the feet and chest, the Labrador is now recognized in three solid colors: black, yellow, and chocolate. The colors are determined by recessive genes, so it is possible to have a mix of colors within one litter. The coat itself is short and dense, but not wiry, and is water resistant, as is fitting of a breed that had its start working in cold waters.

Labs are relatively large dogs, with males standing approximately 24 inches at the withers, weighing between 60 and 80 pounds. Females are only slightly smaller. Labradors are strong and muscular, with a broad head and pronounced stop and brow. The muzzle is of medium length and with a squared rather than tapered appearance. The jaws are strong, but because Labradors are often used for retrieving fowl, they have a soft touch with the mouth in order to avoid damaging the birds being retrieved.

Despite their long-standing use as working dogs and their associations with hunting, the Labrador has a reputation as one of the friendliest dog breeds. Because of their gentle nature, they tend to be very good with children and other animals, making them excellent family pets.

As dogs bred for work, they need to be properly exercised. They are prone to obesity, so a carefully maintained diet and regular exercise is important. However, their easy-going nature makes them suitable for apartment life, as long as they are walked at least twice a day. Because of their retrieving nature, a popular form of exercise is chasing and retrieving, whether it’s a ball, Frisbee, or any other toy. They also do very well with agility training.

Labradors have an excellent sense of smell, which is why they are regularly used by police and military as sniffer dogs, finding both people and materials. However, this sense of smell and focus can cause them to wander away from home or family, in search of a scent. They are easily trainable, but it is important to keep an eye on them, nonetheless.

The intelligence, trainability, and friendly nature of the Labrador have played a significant part in the breed becoming a popular choice for service dogs. As well as working as guide dogs for the blind, they are often used in therapy work and as assistance dogs for those with disabilities. They have even been trained to help their owners remove money and cards from ATM machines.

From world leaders, such as Bill Clinton and Vladimir Putin, to the average family next door, the Labrador Retriever has stolen the hearts of people around the world. This friendly, adorable, loyal and hardworking dog has earned its spot in the homes of millions, bringing joy to everyone who shares their life with this eager-to-please breed.