Irish Wolfhound: The Giants of History 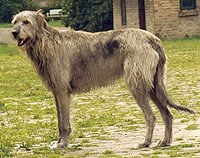 Waiting in the wings of the stage, six performers were preparing to make their entrance in the Los Angeles Opera’s production of Lucia di Lammermoor. The tragic opera by Donizetti, based on a historical novel by Sir Walter Scott, is famous for its scene of madness when coloratura sopranos show off their skills. Although the opera has become famous for the Lucia Sextet variation, the six actors waiting to take the stage wouldn’t be adding their voices to the performance. They were, after all, six Irish Wolfhounds, playing the role of guards in the production.

These Irish Wolfhounds may have simply been extras, but the Wolfhound’s long history seems the perfect subject for an opera. Irish kings, Roman counsels, saints, fierce battles, and near extinction are just some of the legendary elements of this breed’s 2000 years of history.

From BC to AD

Although the full history of the Irish Wolfhound remains unclear, there are references from 273 BC of the Celts using large dogs that resemble the Irish Wolfhound. As far back as 391 BC, a member of the Roman Counsel praised the seven that he had received as a gift, saying that they were considered a thing of wonder throughout Rome. Even the legendary Saint Patrick is said to have gained passage back to his homeland because he was able to look after the hundred Irish Wolfhounds that were part of the ship’s cargo.

Throughout history, the Irish Wolfhound has been a large, powerful hunter, taking on everything from oxen to warriors. They were frequently considered so valuable, that only the nobility were allowed to own them. They were best known for hunting wolves, but as the wolf population of Ireland was gradually eradicated, the popularity of these giant dogs began to wane. By 1786, there were only a small number left who were kept as status symbols by descendents of the old Irish chieftains.

Fortunately, in 1879, Captain George Augustus Graham began working to re-establish this fast-disappearing breed. Through some crossbreeding with Deerhounds, Great Danes, Mastiffs, and Borzoi, Graham was able to establish the modern Irish Wolfhound.

The Irish Wolfhound of today is the tallest of the sighthound breeds, standing up to 34 inches tall at the shoulder. It typically weighs at least 120 pounds and its overall appearance is one of speed and power, with a muscular but lean build. The coat is rough and wiry and comes in gray, black, fawn, brindle, red, and pure white.

Despite the Irish Wolfhound’s long history as a hunter, the breed is surprisingly easygoing. They are patient and gentle and do well with children and even other family pets if trained properly. However, because the Wolfhound is naturally a hunter, it is important to be aware that they may go after cats, rabbits, and even small dogs if they are let loose. Thus, it is best to keep them on a leash when out in public.

The Irish Wolfhound is incredibly loyal, and though it may be reserved around strangers and somewhat independent in nature, it is friendly and affectionate with its family members. Although it is not the most consistent guard dog, its long and close bond with people has made it into an excellent guardian, seeming to sense any ill intentions.

The Irish Wolfhound’s role has changed over the past 2000 years, but its ability to inspire awe and wonder has not. Even the most ardent dog lover is sure to pause in amazement when meeting one of these magnificent dogs. We can only hope that these gentle giants are around for another 2000 years.