Greyhound lovers will love our selection of cute Greyhound checks. We search online check merchants that offer Greyhound check designs so you don't have too. Browse our adorable check selection and enjoy your favorite dog breed checks today.

The Greyhound: A Champion Couch Potato 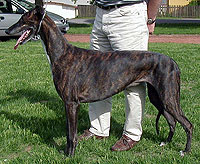 A greyhound may look like it’s built for speed, but it is equally adept at curling up on the sofa and relaxing. Known throughout history for its speed and hunting ability, many people may not realize that the greyhound also makes an excellent pet, with surprisingly low exercise requirements. These peaceful, affectionate dogs instill a great sense of devotion in the people who make them a part of their lives.

There have been sighthounds with a general greyhound-like appearance since ancient times, appearing in Egyptian tomb carvings and Greek and Roman writings. Although DNA evidence now suggests that today’s greyhound differs from some of those early dogs, the greyhound has still existed in some form since before the 5th century BC.

Sighthounds are dogs bred to chase and catch fast-moving prey. These dogs are sprinters, rather than marathon runners, and they were highly effective at catching animals that could be used for food. Their skill and speed made them valuable and desirable to everyone, for catching food and for sport. However, in Britain in 1040, the Forest Laws were enacted, which prohibited anyone but the nobility to own greyhounds, unless the dogs had been made lame. It took 400 years for these laws to be repealed. However, by then, the primary reason for keeping greyhounds was purely for sport, rather than for catching food.
The greyhound remained a pet of the upper classes, being bred for coursing, in which the dog chased after deer or hare. However, when people began moving to the New World, they took greyhounds with them, and once again the breed helped put food on the table, rather than just chasing for sport. Of course, as the New World grew and prospered, the greyhound once again returned to racing purely for sport and entertainment.

A Day at the Races

The greyhound is the fastest dog known to man. In fact, when it comes to accelerating quickly over short distances, the only animal faster than a greyhound is the cheetah. It’s no wonder then that the greyhound has become synonymous with racing. The greyhound can go from 0 to 43 mph in approximately six strides.

Coursing remained the primary form of racing greyhounds until the early 20th century, when the dogs began being raced on tracks. With specialized breeding for the necessary short bursts of speed, the breed was soon reaching its top speeds. The sport remains popular, although not without controversy. Many people began to worry about the conditions race dogs were kept in and what happened to them after their racing days were through. This lead to a number of greyhound rescue groups being organized that deal specifically with rehoming retired racing greyhounds.

Many people assume that a greyhound, especially one that has raced professionally, will be too energetic to make a good pet. Yet the reality is that greyhounds make excellent pets and require little more than a good walk daily. Because they are sprinters, they do not need extended periods of activity. Additionally, because the racers were often kept in their crates for hours and hours, most retired greyhounds are more than happy to spend the day napping, either in their crate or on a sofa or bed.

The greyhound is a pack animal and happily settles in as a family pet, often thinking of itself as a lap dog, despite its larger size. Docile, affectionate, and loyal, the breed even adjusts well to apartment living. They do well with children, as long as young children are taught to treat the dog gently. They generally do well with other pets, particularly other dogs, although it is better to find a greyhound with a low prey drive if you have smaller dogs and cats in the home.

These low-maintenance dogs are visually stunning. They have a short, smooth coat that requires little in the way of grooming. The coat, despite the breed’s name, comes in many colors, not just grey. In fact, as well as being solid colors, such as black, fawn, blue, white, and red, they can also be brindle or particolored, with a white base complemented by another color. Whatever the color, you are sure to have a dog whose natural elegance will catch everyone’s eye and whose gentle devotion will steal everyone’s heart.