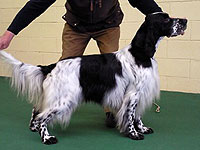 The English setter, which is most likely a combination of Springer Spaniel and Spanish Pointer, traces its early history to hunting game birds. Before the advent of guns, the English Setter would track down and signal the presence of birds in the field by dropping to a down or set position so that nets could then be thrown over the birds. In other instances, the dogs were used to flush out the birds, driving them into the waiting nets. However, once guns became more commonly used in hunting, the English Setter was trained to take the standard point position to mark out the location of game birds.

No matter how they flush out, mark, or retrieve the birds, the English Setter has been a valuable hunting companion for centuries, blending skill with loyal companionship. The English Setter is eager to please, and many hunters over the years have become attached to their individual dogs and to the breed overall. The strong relationship that develops between owner and dog has resulted in many devotees to this athletic yet elegant breed.

Although the English Setter has been around for more than 400 years, its current form and development can be traced back to two gentlemen in the 19th century. The two lines have come to represent the show dogs and the field dogs, with small physical differences evident between the two.

In 1825, Edward Laverack purchased two English Setters from Reverend A. Harrison, who had kept his strain of dogs pure for 35 years. Laverack continued to breed these dogs to achieve a physically appealing strain of the breed, focusing on the appearance, as well as the companionable nature. While the Laverack English Setters did well in the show ring, they were no longer as talented in the field.

By the mid 1800s, R. Purcell Llewellin began working on his own line of English Setters, beginning with some of the Laverack dogs and perhaps adding in some Gordon Setter and other breeds to improve the hunting ability. Eventually, he was successful, and there are field English Setters now known as Llewellins, who are much faster and better able to scent.

Typically, the Laverack dogs are used in the show ring and rarely compete in field trials, whereas the Llewellin setters are more likely to be used for hunting and field trials. As a result, there are few Dual Champions when it comes to English Setters.

Physically, the show English Setters are larger and have more feathering. Field English Setters are smaller and have more distinctive spotting on their coat, as well as less feathering to reduce the likelihood of burrs and tangling. The speckling color combinations of both types of English Setter are called belton. The belton coloring is typically a white base with flecks of orange, black, lemon, or liver. There is also a tricolor, which is blue or liver belton offset by tan markings on the face, chest, and legs.

The English Setter has served gentlemen hunters and is often thought of as a gentleman himself. Although highly companionable and fun loving, this is a breed that responds best to positive training. Because of his desire to please, harsh training and words can have a highly negative impact on the English Setter.

Because of its love of companionship, this is a breed that doesn’t do well when left alone for long periods of time. A happy English Setter is one that gets plenty of exercise and mental stimulation through hunting or long walks and games, and then gets to go home and curl up on the sofa with his beloved family.