The Airedale Terrier: The Bravery of a King 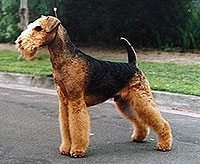 The Airedale terrier is known as the King of Terriers, and like kings of old, this breed has shown valor and bravery on the battlefield. They have been the companion of presidents and a lifesaver of soldiers in the field. From their humble working-dog origins to their bravery in battle, the Airedale takes on every task with dedication and determination.

By Land and By Sea

Like most terriers, the Airedale began life as a working dog, assisting hunters. The breed came about when English hunters began crossbreeding in order to create a dog that was good on land and in the water. Although the early breeders had no specific plan in mind, they were able to come up with a strong, successful candidate after crossing a rough-coated black and tan terrier with an otterhound. This resulted in a dog that was comfortable swimming and scenting its prey in the water, while also chasing it to ground on land.

As often happens when new breeds are created, settling on a name and final appearance can take some time. Within the first 12 years of successfully breeding this all-around hunter, the dog became known as a Bingley terrier or Waterside terrier. Eventually, though, the name Airedale terrier was chosen to best represent the birthplace of the breed, the Airedale Valley in South Yorkshire. Once the Airedale began hitting the show circuit, it was crossed with the Irish terrier and bull terrier in order to refine the appearance.

Most terriers are relatively small dogs, due in large part to their early tasks of digging and burrowing underground to chase after their prey. However, the Airedale is considerably taller than its fellow terrier brethren, often reaching up to two feet tall at the shoulder. They typically weigh between 55 and 65 pounds. The Airedale is a sturdy, muscular, solid dog, ideal for hunting larger animals such as badgers.

The black and tan coloring of their early ancestor remains, with a distinctive saddle pattern. The head and legs are a rich tan color with a black or grizzled section over the back and sides, which resembles a saddle. The coat itself is a broken coat with a soft undercoat and a hard, wiry outer coat that is often crinkled or slightly wavy. One of the distinctive features of the Airedale is the slightly longer beard around the muzzle. This look is achieved through trimming only part of the facial hair. Airedales do shed, but it can be managed with regular brushing. An Airedale’s coat usually needs to be trimmed or stripped a few times a year, usually performed by a trained groomer.

The Airedale terrier’s well-rounded abilities when it comes to hunting made the dog equally suited to a number of other jobs. Fortunately, this is a dog breed that loves to stay busy. The breed was an early choice for work as a police dog and during World War I, it was used for a variety of tasks, including transporting messages and mail, standing guard, and even finding injured soldiers on the battlefield. One particularly notable and noble Airedale was a dog named Jack, who was mortally injured delivering a message to headquarter through enemy fire. He lost his life, but was able to deliver the message in time to save the lives of his battalion. In recognition of his bravery in the field, he was awarded the Victoria Cross posthumously.

Not surprisingly, the Airedale makes a good family guard dog. Although the breed is generally very gentle with children, it can be overly dominant with other pets and is not recommended for homes with cats. The Airedale is an intelligent, independent dog, who needs regular exercise for both mind and body to prevent him from becoming bored and destructive. Like many terriers, when left to their own devices, they are liable to dig and chew.

The Airedale isn’t all work and no play, though. They excel at agility and obedience sports, but they are also happy simply playing with their family. This is a breed that is comical and free-spirited, maintaining a puppy’s sense of playfulness well throughout life.

You may be interested in these other terrier dog breed checks.